Posts to Twitter are referred to as “Tweets”. A Tweet can be up to 140 characters and can contain links, GIFs, videos, and images, as well as hashtags. Steps for both how to send a Tweet as well a how to Mention another user in a Tweet will be explained.

Once you have logged in you will see your homepage, it will look similar to the photo below:

From the Homepage you can click into the dialogue box where it says “What’s happening?” and add your verbiage or any media there, you can also click on the “Tweet” icon in the top right corner to bring up a dialogue box.

Remember when typing out your Tweet to keep an eye on the character count as there is a 140 character limit (not including links). When you have entered too many characters the number will show up negative and the font will turn red.

You can enter any text in the “What’s happening” area of the dialogue box, the icons are explained below: 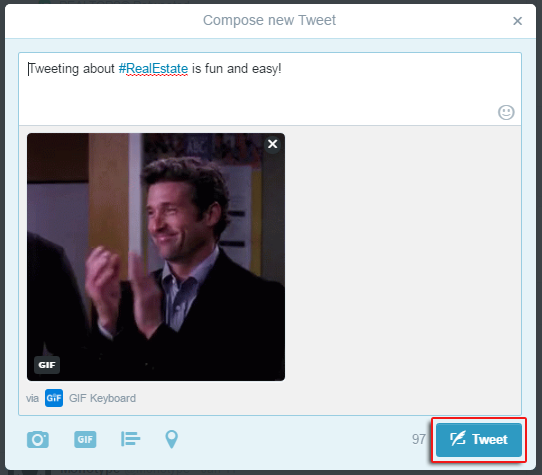 Head to the users profile, if you are not already on it, you can look for them using the search bar in the top right portion of the screen:

Once you are on the profile you wish to Tweet to locate the “Tweet to …” button under the users profile image:

Notice the @username at the front of the dialogue box, this lets you know that you are Tweet at that user specifically rather than just Tweeting in general.